Your cart is empty...

Continue shopping
Product is not available in this quantity.

The Litany of Masculinity Novena

Pray with us. Pray this for yourself, for your husband, your son, your brother, uncle, friend, friend's uncle's grandpa. Whoever you pray for, you are not alone as you pray, and they are not alone in prayers for them.

To reject passivity, SOG Emil Kapaun, pray for me,

Servant of God Emil Kapaun was a Catholic priest and U.S. Army Chaplain born in the small Czech farming community of Pilsen, Kansas. Growing up he was much like any other hardworking farm boy, but was especially mindful of God and others. After his ordination, he entered the Chaplain Corps to serve the troops in World War II.

At the beginning of 1950 he was assigned to the 1st Cavalry Division in Japan. Later that year they were ambushed by a large Chinese Army that had secretly entered the war. Captured by the enemy, this group was forced to march over 60 miles to a prison camp in the bitter cold.

In his seven months in the prison camp, Father Kapaun spent himself in heroic service to his fellow prisoners giving them help and hope when they needed it most. Ignoring his own ill health, he nursed the sick and wounded, stole food for the hungry, picked lice off of men, washed dirty and soiled clothing, and encouraged men through prayer and humor to keep fighting for life. Falling sick, the Chinese moved Father Kapaun to a so-called hospital, where, denied medical assistance, his death soon followed on May 23, 1951.⁠

To accept responsibility, St. Augustine, pray for me

St. Augustine of Hippo is the patron of brewers because of his conversion from a former life of being a party animal and chasing worldly things. Though he was one of the most intelligent men who ever lived and though he had been brought up a Christian, his sins of impurity and his pride darkened his mind so much, that he could not see or understand the Divine Truth.

One day, however, he heard about two men who had suddenly been converted on reading the life of St. Antony, and he felt terribly ashamed of himself. "What are we doing?" he cried to his friend Alipius. "Unlearned people are taking Heaven by force, while we, with all our knowledge, are so cowardly that we keep rolling around in the mud of our sins!" ⁠
⁠
Full of bitter sorrow, Augustine cried out to God, "How long more, O Lord? Why does not this hour put an end to my sins?" Just then he heard a child singing, "Take up and read!" Thinking that God intended him to hear those words, he picked up the book of the Letters of St. Paul, and read the first passage his gaze fell on. It was just what Augustine needed, for in it, St. Paul says to put away all impurity and to live in imitation of Jesus.

From then on, Augustine began a new life. He was baptized, became a priest, a bishop, a writer, founder of religious priests, and one of the greatest saints that ever lived. ⁠
⁠
We ask that St. Augustine help us take responsibility for the ways in which we've turned from God and from each other. When we reject responsibility, we reject the ONE who is calling us to a life with him. ⁠
‍

To lead with honor, SOG Vincent Capodanno, pray for me

Vincent Robert Capodanno, born on February 13, 1929, in Staten Island, New York. Through the example of his parents, Vincent Jr. experienced the dignity of hard work, pride of family, strength of ethnic solidarity and most especially, love of their Catholic faith. The American involvement in World War II impacted Vincent personally with three of his brothers serving in the military and fostered in him a profound patriotism and overt faith.

While on a retreat in 1949 he confided to a close friend and fellow student his vocational desire. After nine years Vincent completed his seminary training and was ordained in 1958. He sought permission to join the Navy Chaplain Corps intending to serve the increasing number of Marine troops in Vietnam.

As the chaplain for the battalion, Father Capodanno was more than a priest ministering within the horrific arena of war. He became a constant companion to the Marines: living, eating, and sleeping in the same conditions of the men. He spent hours reassuring the weary and disillusioned, consoling the grieving, hearing confessions, instructing converts, and distributing St. Christopher medals. Such work “energized” him, and he requested an extension to remain with the Marines.

It was during his second tour in September 1967 that Father Vincent Capodanno made the ultimate sacrifice. After hours of fighting from a North Vietnamese ambush, Father Capodanno ran to the assist a wounded corpsman and the Marine he was assisting who were pinned down by an enemy machine gunner. Despite being unarmed, the enemy opened fire at Father Capodanno, leaving him with 27 bullet wounds. He died faithfully performing his final act as a good and faithful servant of God.

Honor: a reputation worthy of respect and admiration. You earn that reputation by adhering to a certain standard of conduct: courage, strength and self mastery. SOG Vincent Capodonno was a man of worthy of such a reputation.

To be used for the greater good, St. Peter, pray for me

St. Peter, after the Holy Spirit descended on you at Pentecost, you went out to the streets to proclaim the Gospel even though you knew it would most likely lead to your imprisonment and death. ⁠

At an early age, Pier Giorgio joined the Marian Sodality and the Apostleship of Prayer, and obtained permission to receive daily Communion (which was rare at that time).

He developed a deep spiritual life which he never hesitated to share with his friends. The Holy Eucharist and the Blessed Virgin were the two poles of his world of prayer. At the age of 17, he joined the St. Vincent de Paul Society and dedicated much of his spare time to serving the sick and the needy, caring for orphans, and assisting the demobilized servicemen returning from World War I.

He decided to become a mining engineer, so he could “serve Christ better among the miners.” Although he considered his studies his first duty, they did not keep him from social and political activism. In 1919, he joined the Catholic Student Foundation and the organization known as Catholic Action. He became a very active member of the People’s Party, which promoted the Catholic Church’s social teaching based on the principles of Pope Leo XIII’s encyclical letter, Rerum Novarum.

Mountain climbing was one of his favorite sports. Outings in the mountains, which he organized with his friends, also served as opportunities for his apostolic work. He never lost the chance to lead his friends to Mass, to the reading of Scripture, and to praying the rosary.

Just before receiving his university degree, Pier Giorgio contracted poliomyelitis, which doctors later speculated he caught from the sick whom he tended. After six days of terrible suffering Pier Giorgio died at the age of 24 on July 4, 1925.

Bl. Pier Giorgio Frassiti, you took a 360 degree approach to life - pushing physical limits and establishing spiritual disciplines. This allowed you to fight for the faith and dignity of others.

To establish holy brotherhood, St. Maurice, pray for me

St. Maurice was a soldier known for his martyrdom. Maurice was an officer of the Theban Legion of Emperor Maximian Herculius' army, which was composed of Christians from Upper Egypt.

He and his fellow legionnaires refused to sacrifice to the gods as ordered by the Emperor, and when they refused to obey repeated orders to do so, Maximian had the entire Legion of over six thousand men put to death.

To the end they were encouraged in their constancy by Maurice and two fellow officers. ⁠

To increase in Holiness, St. Pope John Paul II, pray for me

“Everyone knows John Paul II: his face, his characteristic way of moving and speaking; his immersion in prayer and his spontaneous cheerfulness. Many of his words have become indelibly engraved in our memories, starting with the passionate cry with which he introduced himself to the people at the beginning of his pontificate: ‘Open wide the doors to Christ, and be not afraid of him!’ Or this saying: ‘No one can live a trial life; no one can love experimentally.’ An entire pontificate is condensed in words like these. It is as though he would like to open the doors for Christ everywhere and wishes to open up to people the gate that leads to true life, to true love.” - Pope Emeritus Benedict XVI⁠
⁠
The life of a saint is one in which the Gospel is luminous. In this way, the Church has received an inestimable gift in St. John Paul II. Through his life, he has shown the radiation of the fatherhood of God in humanity, or what St. Paul calls the "newness of life in Christ" (Cf. Rom. 6: 4).⁠

To bind us in true love, Mary Most Holy, pray for me

“Holy Mary, Mother of the Lord, you remained faithful when the disciples fled. Just as you believed the angels incredible message – that you would become the Mother of the Most High, so too you believed and trusted God at the hour of his greatest suffering. In this way, at the hour of the Cross, at the hour of the world’s darkest night, you became the Mother of all who believe. We beg you: teach us to believe, and grant that our faith may bear fruit in courageous service and be the sign of a love ever ready to share suffering and to offer assistance.”

Help me to claim my identity as a man, Jesus, pray for me

That I may sacrifice myself in imitation of you.

What do we actually say about Jesus?
The one who first taught us how to lay down our lives so others could live.

Our journey towards The 4th Man 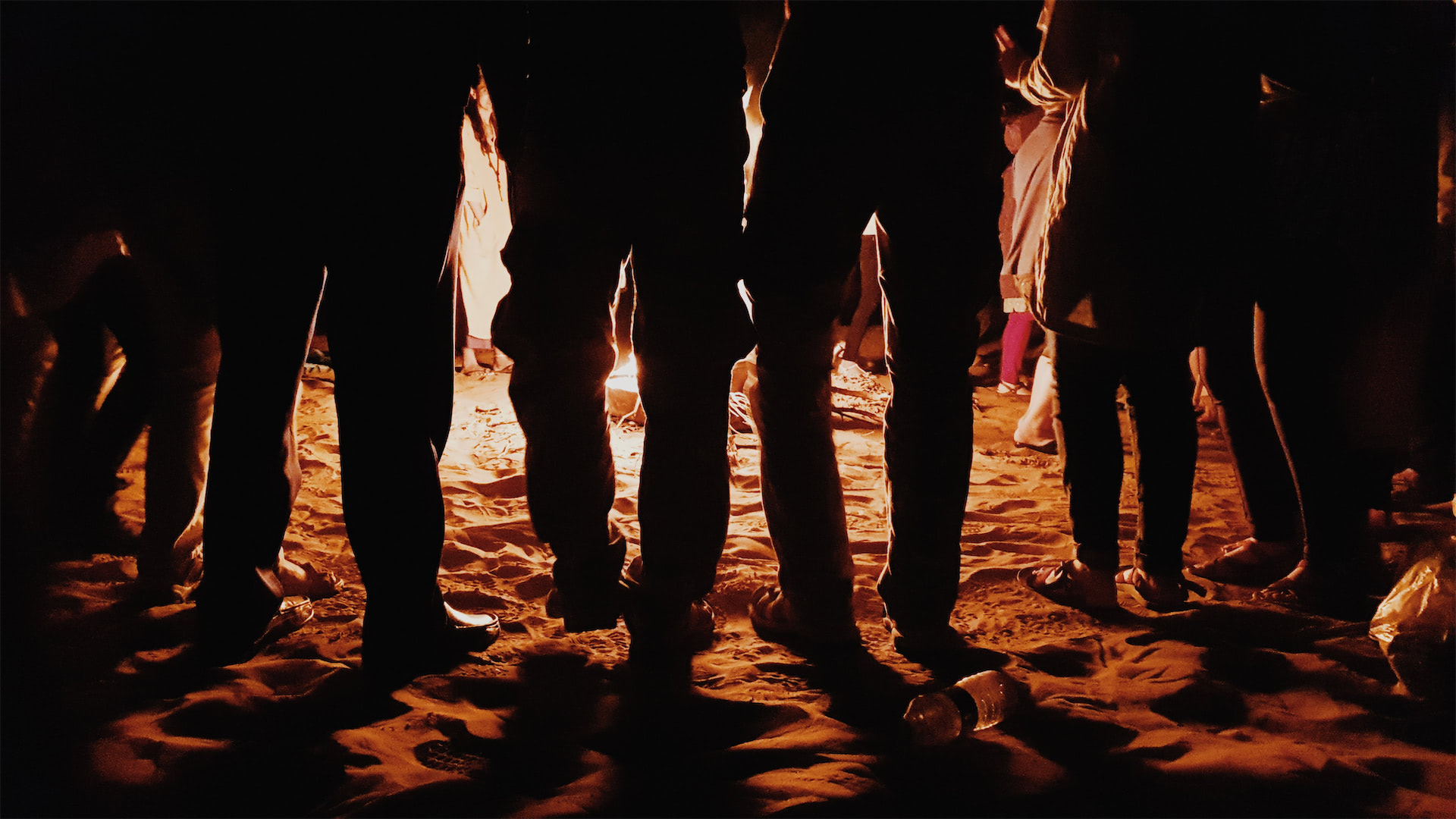 Origins of the Litany of Masculinity

Be the first to know! Get our latest news straight to your inbox.

Thank you! Your submission has been received!
Oops! Something went wrong while submitting the form.
For more information, including how we use your personal information, please see our privacy policy.

There’s always a starting point. We believe that a good conversation is about considering your options and seeing if we can help.